I am studying “animal” from the cultural anthropology and ecology anthropology, and ecology anthropology. My main fields are Yukon, Canada. I am researching the relationship between Canadian First nation’s Kaska also Inland Tlingit and animals, by focusing on hunting, art and religion. In addition, small-scale coastal whaling in Japan and wild boar hunting in Yaeyama region are my field too. 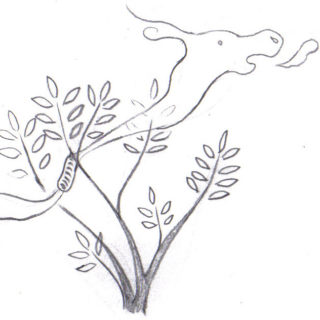 Probing into the relationship between humans and animals:
Getting closely involved with northern hunter-gatherers

The reason I—a researcher interested in the relationship between humans and animals—have chosen hunter-gatherers as a research theme is that I felt the best way to pursue my interest would be to interview hunters experienced with animals. For hunter-gatherers, animals have long served as a supplier of food and clothing as well as of antlers and skins for artifacts, which have had a profound bearing on humans from musical, cultural, religious and other aspects. The comprehensive discipline encompassing these aspects is none other than cultural anthropology, a realm best suited for a curious person like me. Given the fact that people in cold regions tend to depend more on animals in their day-to-day lives, I have chosen Hokkaido University as the ideal institute for conducting research on northern indigenous people. I have the pleasure of being surrounded by optimal research environments, including faculty members seasoned in field work, extensive collections of documents and resources, as well as climatic conditions similar to those in the research fields of other countires.

Receiving expertise from one person and passing down it to another:
Experiencing the essence of cultural anthropology

In Canada, I accompanied an elder of the Kaska First Nation, and managed to empirically acquire hunting skills and expertise in animals as an apprentice hunter. As a trainee taught the knowledge and skills only possessed by the master hunter, I spent my days consumed with a desire to achieve the results I firmly “received” from the master and show them to him.

Since we were on such terms, he was cordially delighted when I informed him that I assumed a position as a faculty member. It seemed likely that he was pleased to know his student (or I) would eventually come to stand in a position to pass something down to other people. Only then was I able to feel the essence of cultural anthropology in which you are able to learn something from people. Now I feel that my turn, I should pass down to all of you the education I have received from the Kaska patriarch.

I originally studied animal ecology, and the first thing I sensed after stepping into the world of anthropology was that it was too liberal of a discipline. By simply putting a single word before anthropology (e.g., artistic anthropology, linguistic anthropology, religious anthropology, gender anthropology), you can easily create new fields related to anthropology. As for research methods, it is not always based on a specific methodology, nor does it have to reproduce a phenomenon (perhaps “nor can it” would be more accurate). Such liberalness is the greatest attraction of anthropology and at the same time, it may create an impression that it is somewhat difficult when viewed from outside.

However, as I placed myself in the world of anthropology, I began to see factors indispensable to anthropology. One is to place yourself in research fields and look at things in perspective. It can be said that research fields serve as an important identity for anthropologists. Some have multiple fields, while others may only have one. In any case, staying there as well as intellectually and empirically studying the target help bring original viewpoints to anthropology. I think seeing things in perspective is also important when observing humans and cultures that constitute research targets for anthropology. Perspective refers not only to a way of looking at things by comparing unfamiliar different cultures with your own culture but also to a way of seeing things by, say, positioning humans in human history.

One of the real thrills of anthropology is that if you continue your fieldwork in this way, you will begin to feel that foreign cultures that once seemed distant are now actually very close to you. My research field in Canada I visited for more than ten years has become my second hometown. Recent years have seen a growing number of young anthropologists not only visit there as observers but also proactively become involved in local communities by acquiring skills from locals or helping improve their living conditions. Such empirical learning is invariably conducive to broadening the horizons of learners and empirically obtaining understanding that will serve as a solid guideline for their future career. Whether or not you intend to become a researcher, I look forward to having those interested in anthropology visit our laboratory of cultural anthropology.