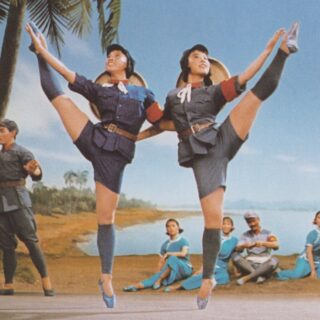 Beijing operas—Chinese traditional performing arts—were affected by a wave of modernization in the 20th century. As a result, female roles once played by nan dan (female-role actors) also began to be played by actresses. In response to the rise of actresses, Mei Lanfang, one of the most outstanding nan dan in the history of Beijing operas, sought to improve his own acting skills to enhance the value of nan dan, while in Shanghai, where the influx of overseas culture happened quickly, some nan dan attempted to impersonate new modern women with special costumes and performances as elegant as those of actresses. Their way of life was directly reflected in the history of Chinese culture. These rough and tough actors pursuing their artistic cravings in line with the trend of the times shined as brightly as stage settings.

Receptive laboratory of sinology;
Visual documents as a common language

The Laboratory of Sinology at Hokkaido University is so receptive that you can pursue virtually any research related to China. The Iconography and Memory of Breasts, a joint research project headed by professor Masaya Takeda, dealt with the history of breasts in Chinese culture. Beginning with matters in China and then transcending the boundaries of regions and disciplines, it went as far as to delve into imagination associated with breasts. I would like you to remain inquisitive rather than spending your time as a student opting for the shortest route to your goal.

It can be safely said that visual culture such as dramas and paintings has played a central role as a common language in a country like China with numerous dialects and a history of low literacy rates. I truly feel inclined to share with you the pleasure of interpreting visual images without merely depending on the knowledge derived from books and documents.

I am interested in how the traditional styles of long-standing Chinese dramas and literature have embraced external cultures or transformed while eliminating external factors. I believe looking at a world map from the vantage point of Hokkaido and considering cultural interactions between the Chinese continent and its surrounding regions invariably provides clues to identifying issues and phenomenon at home. Let’s consult dictionaries, read books and edit cultural magazines of unknown Chinese-speaking countries at the Laboratory of Sinology!