I am engaged in research to restore the past ecology and distribution of wildlife and clarify their relationship with humans, mainly using historical materials from the Edo period. I also study the history of animal management at zoos in modern Japan, based on records of zoos in the past, mainly Ueno Zoo. 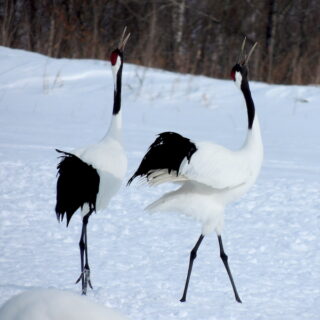 When I encountered a sentence from ancient documents saying that cranes were important prey for falconry in the Edo period (1603-1867), I wondered if the cranes mentioned in the documents referred to red-crowned cranes mainly inhabiting Hokkaido or lesser hooded cranes. In addition to the identification of the specific variety, my research focuses on animals portrayed in literature to delve into relationships between animals and humans, which is a highly novel research field. With few preceding studies, I take all the more delight in discovering new accounts related to animals, which further motivates me to become engrossed in literature research.

Graceful, fierce God of the Marsh;
Truth that clearly stands out from the scrutiny of literature

Records reveal that red-crowned cranes, referred to as sarorun kamuy in the Ainu language, bear a graceful and noble image, but were dreaded by the Ainu people as fierce and dangerous. When I first stood face-to-face with wild red-crowned cranes, even I feared for my own physical safety for a moment. I experienced their tremendous impact firsthand, which led me to understand why the Ainu people came to describe the avian species in this way. Direct observation of these cranes clearly unveils the truth the literature intended to convey. What I learned from this was truly precious. Hokkaido, which is home to a variety of wild animals, potentially embraces fascinating research subjects other than red-crowned cranes, such as brown bears, Hokkaido deer and sea eagles. Let’s pave a new way for community-based wild animal research!

Why not examine history and culture relevant to wildlife by perusing historic documents?

I am engaged in research on history and culture related to wildlife from two perspectives: the history of the relationship between animals and humans as well as the past distribution and ecology of animals. Taking my own research as an example, the hunting methods for and ways in which cranes were eaten by people in the Edo period (1603–1867) or the real conditions of agricultural damage caused by cranes constitute one aspect of the relationship between humans and wildlife. On the other hand, to elucidate the history of wildlife, it is also important to consider the past reality of animals themselves, which does not necessarily involve human interaction. I am exploring the past distribution and ecology of animals from historic documents to determine where and what species of cranes lived in the Japanese archipelago during the Edo period and how they migrated.

To research history and culture with respect to wildlife from various perspectives, we conduct a variety of investigations. We often tour all over the country seeking out ancient documents or actual materials, leveraging the geographical information system (GIS) to replicate the past distribution of animals and dissecting birds to ascertain information written in ancient documents. To correctly interpret wildlife records, it is essential to first understand the ecology of modern wildlife and realize the actual situations of their protection and management. To this end, we emphasize the experiences of firsthand wildlife observation as well as the connection to field sites where relationships between modern wildlife and humans are developed.

Hokkaido is home to a variety of wildlife. Your research may of course be focused on wildlife outside of Hokkaido or Japan. As there are still very few animals studied from the perspectives of history and culture, you can take on any wildlife such as mammals, avian species, amphibian species, reptiles and fish as your research themes. Why not join us in carrying out research on the history and culture of animals you like or in which you have interest?