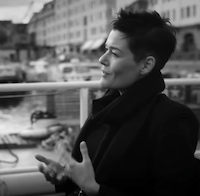 Email: kjacobs(at)let.hokudai.ac.jp
Replace “(at)” with “@” when sending email.

What is meaningful relatedness?

The philosopher Søren Kierkegaard aptly described man in his book “The Sickness unto Death” as a relational being: Man must mediate himself as a relational being with others and with his environment as a whole. We are always also an expression of the relations in which we stand as agents. Being human, then, means modeling a “being-in-the-world-with-others” in all conceivable forms of sense-making in the (often conflicting) spheres of what is possible and what is real. It is precisely these relations and their shaping that can be philosophically investigated.

When one is especially interested in the analysis of those relations, in which a human being can be confronted with himself, others, and the world in a rather problematic way, e.g. through illness, alienation, loneliness, loss or immorality, one can take several disciplinary approaches for such analyses: from the perspective of the philosophy of psychiatry, one asks, for example, how certain changes in the self-world-relation can be phenomenologically grasped in such a way that one can better understand specific forms of illness such as depression. From a medical ethics perspective, one can ask what a good doctor-patient relationship should actually look like, while organizational ethics explores, for example, the relationship of humans to the field of work or asks what should eventually characterize “good” institutions in the future with respect to adequate crisis management. The insights gained from one perspective often open up new questions in other fields, which in turn then require to apply a different disciplinary view. In a nutshell: questions about the (altered) relationship to self, others and the world are often questions about what makes a good life, and this has to my opinion be addressed from an multidisciplinary perspective within the realm of philosophy, and from an interdisciplinary perspective in exchange with the other sciences.

When you ask how our relationships to ourselves, to others and to the world can be shaped in such a way that these can be called good, the answers are depending on which values and norms, theories of well-being or the good life we want to apply. This is also philosophy: to endure the insight that there are no universally valid answers in a positive sense. That is why I try in my work, particularly through the analysis of conditions in which one´s relational being in the world is significantly altered, to grasp rather ex negativo what we might consider to be the normal, the healthy, the good, and thus to critically question precisely this.

One methodological core questions is: What actually is critique? Who can criticize whom, how and for what reasons? The practice of critique takes these methodological questions of a philosophical critique of practice to heart: It wants to justify its contents and objectives in interdisciplinary dialogue in such a way that especially a change of those conditions that lead to non-trivially harmful relational practice forms appears as rationally required. Here we must be careful not to relapse into the myth of enlightenment, as a rational change for the “good” is admittedly philosophically always debatable. But the diagnostic view of philosophy can show at least what might be at stake if such „distortions“ of our being-in-the world, and of those conditions that cause them, are not taken seriously enough: namely the loss of the ability to criticize, and thus of the possibilities for insight and freedom.

In my courses there is one important rule for our being-with: Don’t be afraid! Neither of great philosophical questions, nor of other minds, and certainly not of addressing questions yourself in the first place. In my team we learn from each other, we take detours, we reflect on thought errors, we debate hotly, we analyze with a cool head, we have no problem disagreeing at times; and we do so in English and/or German language. Everyone who is interested in Practical Philosophy is cordially invited to join in. To put it with Friedrich Nietzsche: „Get on the ships, you philosophers!“ or in the style of Pina Bausch: Think! Think! Otherwise we are lost.

To be with oneself in the other, that is the formula of the free spirit. In philosophizing we can experience this, if we can get involved with the thoughts of others in such a way that we neither completely lose ourselves in them, nor experience ourselves as fundamentally limited. Then perhaps philosophy also becomes art. Above all one of life.